The most striking feature of a princess cut diamond is its exceptional fire because of the 59 facets in its cut. While square princess cut diamonds are popular, the rectangular/elongated ones are also available in the market (some shoppers who buy the later like them for their bigger/larger appearance). 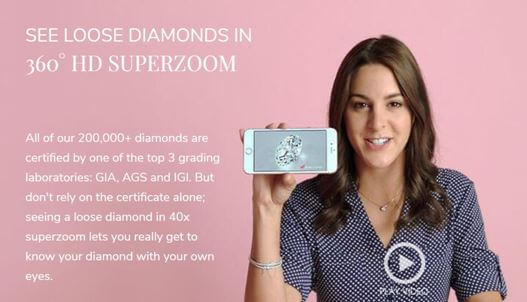 Always seek the guidance of diamondbuild.co.uk before buying a princess cut diamond. Color is an important consideration, so is the carat weight.

The proportions chart below provides a comprehensive overview to buyers that are in the hunt for a perfect princess cut. The chart also serves as a general and clear guideline that a buyer could use while evaluating the cut of a princess shape diamond. A general rule of thumb should be to avoid a princess cut diamond that has a significantly larger table percentage than the depth percentage.

As a buyer, while purchasing a princess cut diamond, the first point to note (one that you should also watch out for in other diamond shapes) is to avoid a diamond with a higher table percentage than the depth percentage. The table is the uppermost region in a diamond and tends to run flat across the diamond’s surface.

The table is also parallel to the girdle. As for the depth, it is the specific distance between the highest and the lowest point of the princess cut diamond.

A princess cut diamond should be set with safe prongs that work to protect the four corners, as the shape has a higher probability of chipping. Since the four corners were initially closer to the outer edge of the rough diamond, a variety of flaws/inclusions such as extra facets, naturals, and crystals are likely to be located there.

Since the four corners are generally covered by the prongs, all these flaws eventually become invisible once the diamond is set. In rare cases, reports show that the deficiencies are significant enough to impact the stability of the diamond.

THE HISTORY Of PRINCESS CUT DIAMONDS

In the modern world, the second most sought after diamond shape is the princess cut. It is most popular with women looking for an engagement ring. The princess cut shape is a square gem that has fifty-nine facets and sharp edges. Its shape gives it a uniquely stunning and stylish appearance.

While viewing the diamond from the side, a princess cut tends to resemble an inverted pyramid. What makes a princess cut diamond famous is the fact that we generally find its modern shape and brilliance highly attractive. These two factors will continue to make the princess cut a classic for years to come.

Women also adore the timeless, simple, and generally beautiful aura that the princess cut provides. The combination of the brilliant cut, as well as the modification present in the square shape, tends to give the gem a bit of glamor and class while still preserving its exceptional sparkle.

Even more surprising is that more and more men are also getting attracted to the diamond. Why? The beautiful and straightforward finite square shape can also give a masculine look, leaving men feeling comfortable and unjudged.

While princess cut diamonds are famous for their use in engagement rings, people also use the versatile cut for other purposes. The shape is used in necklaces, earrings, and bracelets.

Let’s get into the history of the modern style princess cut diamond, shall we?

The Origin of the Princess Cut Diamond

In the earlier days, the princess cut was referred to as “the profile cut.” The man behind the great gem is Arpad Nagy, and the shape was designed in 1961. After about sixteen years, the diamond got renamed to princess cut by three individuals, namely, Israel Itzkowitz, Betzalel Ambar, and Yari Perlman. The changing of the name took place in Israel.

Another point to note about the princess cut diamond is that it can be traced back to 1971, where a specific diamond cutter, Basil Watermeyer patented a completely new diamond cut. The cut was named “the Barion.” The shape closely resembles the modern-day princess cut. However, the Barion has many symmetrical lines making it rather difficult to cut into a proper shape. The diamond cutter then went ahead and introduced the Quadrillion shapes in 1979. The cut was similar to the Barion cut, but there was a big difference to the first one.

While the Barion had around eighty facets, the Quadrillion, had approximately forty-nine. The Quadrillion and the Barion can, therefore, be thought of as vital steps into the foundation of the modern princess cut diamond.

A Sparkle a Day Catches an Eye Each Day!

The modern shape was finalized after years of expert research as the industry had a sense of missing diversity in terms of shapes and cutting styles.  The industry wanted to provide greater satisfaction to buyers in search of a perfect diamond.

The result? A perfect square diamond with approximately 59 facets. The unique cut is designed to provide an incomparable sparkle, and this gives buyers a run for their money.

The one aspect that makes a princess cut diamond a popular and unique shape is the time spent perfecting the gem’s corners. The majority of reports show that several hours are spent trying to complete the stone’s faceting and polishing.

The 59 facets present in the diamond are strategically positioned in an almost similar manner as on the brilliant-cut. From that perspective, it is also safe to state that princess cut diamonds usually have close similarity in its faceting with round brilliant cut diamonds. 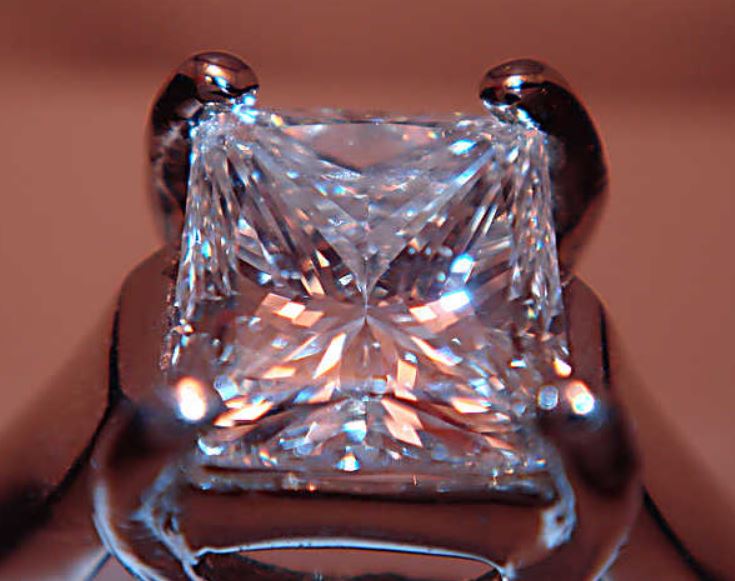 The Value of the Princess Cut Diamond

When the rough diamond goes through the process of cutting into different shapes, a variety of these diamonds get lost through the process. With that in mind, it is safe to state that the more considerable the amount lost during the process, the higher the price of the precious diamond.

The reason behind this is that a significant amount of the rough diamond actually goes into the making of the diamond. In the case of the princess cut diamonds, what makes the diamond unique is that when the diamond undergoes the cutting process, only about twenty percent goes to waste. Amazingly this makes the diamond one of the most efficient and consistent shapes among all the other diamond shapes.

Since the princess cut diamond does not waste too much of the rough diamond while making, the buyer will be guaranteed to acquire a much cheaper princess diamond compared to the other types of cuts, even with the different cuts being of the same clarity, color, and size.

The Quest behind Clarity

With that in mind, it is safe to say that when it comes to evaluating clarity in the princess cut diamonds, the process is generally subjective. The Gemological Institute of America provides every person with quality guidance and help when it comes to the clarity grades.

Still, it is also important to note that every single customer will always have a standard anytime clarity comes into the picture. Some individuals are comfortable having a princess cut diamond that has an inclusion provided the buyer or owner of the gem does not include it at the cost.

The high point also works when one is viewing the princess cut diamond with the naked eye. As a buyer, the clarity chart below offers a guide while evaluating everything to do with transparency.

Just like clarity, the colors of the princess cut diamonds also tend to be subjective. The Gemological Institute of America usually lends a perfect and excellent guide when it comes to the color that the buyer wants to purchase.

While going through the process of buying the princess cut diamond, it is advisable that every retailer considers or generally keeps in mind that a majority of the diamond buyers usually prefer to have slightly warmer colors. These warm colors typically lie between the G and H diamond range, and the buyers prefer them over the cool colorless appearing princess cut diamonds that lies between D and F.

The statement means that for the customers that wish to own the princess cut diamond that lies between the D-F color grades, there is a higher probability that most will end up paying a premium to hold the diamond.

Where the process of the diamond color grading did not exist, there is also a higher probability that the price premium surrounding the more senior grades would generally be much lower. The lower price is because the real differences in color will be much difficult for one to perceive.

It is always a good idea to have access to an expert to guide one through the process of acquiring a gem no matter the type. An expert is most useful during the purchase since the person has a better idea of the best of the princess cut diamond that one will be looking for.

Keeping that in mind, for further understanding, below is a color chart that provides the buyer with a comprehensive guide for analyzing the color of the princess cut diamonds.

During the mining of most rough diamonds, a majority of these tend to either be too inferior or too poor in quality to produce the perfect princess cut diamond that is usually on-demand within the fine jewelry industry.

With that in mind, to acquire a bigger size princess cut diamond ring, an individual will need to have a couple of bucks to spare during the purchasing of the particular gem. The princess cut diamonds are usually in most occasions cut using a standardized guideline which tends to make it easier to estimate the carat weight of the diamonds using a couple of millimeter dimensions.

The strange and delightful occurrence of the newly shaped princess cut diamonds is the talk of the town. Reason being that the diamond generally gives out a fresh yet stylish look while still working to maintain the diamond’s brilliant shine.

The diamond cutters typically get away with polishing the gem since it has lesser material to clean up. The activity helps the cutters achieve the perfect and optimal diamond cut. The diamond only loses about 20% of the rough stuff that is taken from the earth’s crust, which ultimately results in the ideal princess cut diamond shape.

Since the princess cut diamond usually has a couple of sharp edges that protrude, there is a higher risk of chirping. The sharp edges have also shown to have dead corners in the princess diamond cut.

Since these corners are also part of the light within the diamond, the sparkle generally tends to get lost. It is because of this very reason that the well-polished princess cut will never get to shimmer as bright as the well-polished brilliant.

That said, the individual could always get a larger diamond with the same amount while going for a princess instead of brilliant. These reasons should not discourage one from investing in the precious diamond.

The only thing that one needs to keep in mind while purchasing the diamond is to be sure of what they are getting into during the purchasing process. Not a lot of people understand how essential it is to care for the diamond that they own.

Another thing to note while purchasing the princess cut diamond is that one could still get more for the bucks compared to other types of diamonds. Think of it this way; a one-carat princess diamond is usually equal in price to the 0.80 carats round diamond.

As a result of all the cutting, the diamond tends to appear larger and also achieves the particular brilliance that every buyer looks for when choosing the perfect diamond.

The Icing on the Cake!

So, when in search of a perfect gem, one can consider the princess cut diamond to be among the contenders. The diamond has a lot more to offer, regardless of your budget.